“The court of the Sanhedrin. Guilty of death, ”Nikolay Nikolaevich Ge – overview of the painting 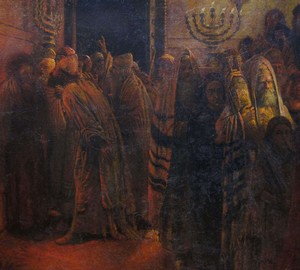 The court of the Sanhedrin. The guilty of death is Nikolai Nikolaevich Ge. Oil on canvas. 201 x 297 cm

This picture of the artist Ge has suffered greatly from both time and the judgments of critics. It was created by the master in 1892 for the Mobile Exhibition, but it was not put into the exposition. She categorically did not like King Alexander III and the prosecutor-prosecutor of the Holy Synod of Pobedonostsev, who at that moment was the main reactionary of the empire. Under their influence, Grand Duke Vladimir Alexandrovich – the brother of the emperor and the president of the Academy of Arts – did not allow the use of the canvas in the exhibition.

All these people and many others were embarrassed and indignant at the interpretation of the image of Christ. In the picture, he is depicted as a clogged, puny, ugly and poorly dressed person who is openly threatened by members of the Jewish Sanhedrin. This fundamentally contradicts the traditions of the image of Christ as a beautiful young man with the right facial features and long wavy hair.

The canvas depicts the solemn exit of the Supreme Court of the Sanhedrin, which dismantled the “case of Jesus Christ.”. They found him guilty because they could not recognize the progressive views of the preacher. The same thing happened with the artist himself. For that time, everything was strange and “wrong” in his picture – from a composition with Jesus driven into a dark corner and a magnificent ceremony of priests in the foreground to the image of Christ himself in the form of an unhappy, almost cut off and ugly low-grown person.

The painting is part of the “Passionate Cycle” of the artist when he lived and worked on his farm in the Chernihiv province. Then he experienced a clear lack of funds, which affected the quality of the painting and the preservation of the picture. For her, a low-quality canvas with a removed layer of paint, cheap dyes and rancid linseed butter for dilution were already used. All this led to the fact that the canvas has not been exhibited for many decades, even when it was bought by the Tretyakov Gallery. A lot of time and effort was spent on his restoration and restoration, but the work of art was saved. It is exhibited for the first time in decades and allows viewers to themselves evaluate the high quality of painting and the extraordinary thinking of its talented author.