The courtyard of the peasant house, David Tenirs the Younger, 1640 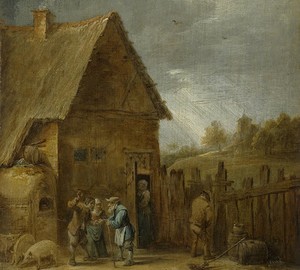 The courtyard of the peasant house is David Tenirs the Younger. 1640. Oil on canvas. 22.5×16.4
The backyard of the peasant house, fenced with a shaken fence, was depicted. Three peasants – a married couple and an old man – agree on the sale of pigs nearby (it is no coincidence that in the old ermitage catalogs this work was called “Entracted Trading”).

The picture with such an uncomplicated plot is exquisite in color, full of subtle shades of various colors. The sky at Tenirs is an endless gradation of gray, with nuances of white and blue. With yellowish, brown, greenish tones, the artist conveys the nebroscience of a small corner of Flemish nature (laze on the right in the depths). In a picturesque manner, the ermitage picture is close to the works of Tenirs, performed in the second half of the 1640s, for example, “Landscape with players in pins”.