“The Dead Christ in the Rob,” Hans Golbanein – overview of the painting 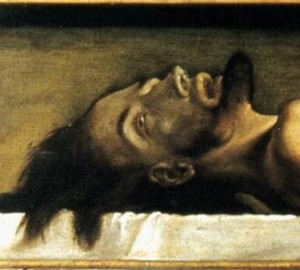 This picture is one of the most unusual images of Jesus Christ. In the usual, traditional style, the death of the son of God was depicted delicately, without naturalistic signs, and sometimes even pathetically, sublime. In the same picture – naked realism, the undisguised cruel truth of death – ugly, the corpse that began to decompose.

Unlike many other works on the Holbein canvas, Christ appears before us not as a super-existence, but as an ordinary person. He, like everyone else, is mortal, and only then his spirit will conquer darkness, soar and give the world a miracle of the Resurrection.

Traces of torture and beatings are visible on the body of dead Christ. The features of his face are distorted by mortal suffering, his mouth is skewed, his skin has darkened. This is not the “marble” or “farfor” body of a deity, which is traditionally depicted on religious canvases. This is the flesh of a man beaten and tortured for his faith.

Many researchers see the Holbein unbelief in this fact. But the artist could well use such an artistic technique to emphasize the divine nature of Christ, who managed to leave his tortured mortal body and perplexed to heaven, resurrected in a living form. This is quite possible, because it is believed that the picture was part of the altar. Perhaps the elements of the canvas that were not enough for us complemented the general impression and changed the semantic orientation of the main part.

The incredible realism of the image is explained by the fact that the picture is made from nature – the artist wrote Jesus from a drowned man extracted from the Rhine. This fact can explain the presence of injuries and bruises on the body. The dead sitter involuntarily gave the master real material to create an extremely realistic and especially terrible image of violent cruel death.

Another feature of the picture, making it original and unusual, is the horizontal location of a narrow, elongated canvas. It seems that the viewer sees a body placed in a transparent coffin, which further enhances the gloomy impression of the canvas.

Signs of death and decay are underlined by the dark, gloomy color scheme of the picture. It is made in grayish brown tones, the only bright element is the fabric of the loincloth of Christ and the canvas on which his body lies. There is no glow coming from the body, as in other paintings, only death and decay.

By the effect that is produced on the audience, this picture can be compared with another great work on the same complex topic – “Dead Christ” by Andrea Manteni. But, unlike the work of the Italian artist, Christ is infinitely lonely in the Holbein canvas – there are no relatives or followers next to him.