“The Death of Adonis,” Sebastiano del Piombo – overview of the painting 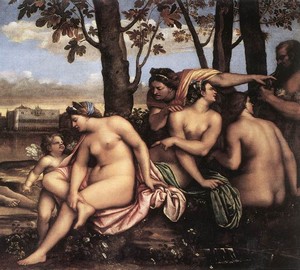 As a student of Giovanni Bellini and having experienced the influence of Giorgione, Sebastiano del Piombo (about 1485-1547) took advantage of the softness of the forms and the lyrical mood from them, bringing them to their paintings. But, working in Rome, he was also influenced by Raphael’s art with its absolute harmony and Michelangelo, who endowed his characters with unprecedented power.

In the presented canvas, the artist addressed the myth of Adonis, the most beautiful young man, the beloved of Aphrodite, who was killed during the treble hunting. Del Piembo depicted the moment when Aphrodite learns about the death of Adonis, which Cupid informs her of, most of the work being occupied by deities sitting in the grove, and the dying hero is at a distance. This technique – to take the climax of the entire scene to a certain distance, to delay its perception by the viewer – sharpens the alarming mood, spilled in the picture and in the wave running through the characters.

In the background, the artist captured the appearance of Venice with the Palazzo of the sores and the bell tower of the Cathedral of San Marco, reflected in the quiet waters of the lagoon. An evening landscape with a bright blue sky, golden sunset, white puffy clouds in the tower and shadows running on the ground and water fills everything depicted with fine sadness, which Venetian artists loved to convey in their paintings.