“The Death of Camilla, Sister Horace,” Fedor Antonovich Bruni – overview of the painting 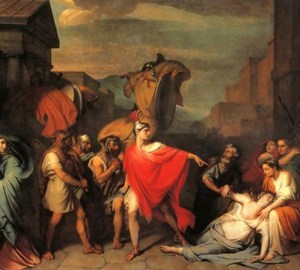 The death of Camilla, the sister of Horace – Fedor Antonovich Bruni. 1824. Oil, canvas. 350×526
Bruni is one of the most significant figures in the Russian academic school of the first half of the 19th century. His father, an Italian by birth, served in the troops of Field Marshal Suvorov, at the beginning of the 19th century he moved to Russia, was a painter at the Tsarskoye Selo palaces.

After graduating from the St. Petersburg Academy of Arts in 1818, Bruni lived in Italy for several years. Upon his return, he held the positions of professor and rector of the Academy of Arts, managing its mosaic department, as well as the keeper of the Hermitage Art Gallery. Bruni was elected an honorary member of the Roman, Milan, Florentine and Bologna academies.

Bruni’s artistic heritage is very great. He painted on historical topics, portraits, performed monumental compositions for St. Isaac’s Cathedral in St. Petersburg and other churches. He received the fame painted by him from nature and a lithographic portrait of A. WITH. Pushkin in the coffin, dated “Genvary 30th 1837”.

The painting “The Death of Camilla, Sister Horace” was created by Bruni in Rome. Put there for viewing, she glorified her twenty-five-year-old author with the perfection of drawing and composition.

The plot of the picture is borrowed from the history of ancient Rome. This is a tradition of martial arts between the three Romans – the brothers Horace and the three Curia – the soldiers of the city of Alba Longi hostile to Rome. Having won the victory, Horace returns to Rome with triumph and finds his sister Camilla, mourning the Curia, whom she loved. In a fit of patriotic anger, Horace kills her. The style and content of Bruni’s painting is characteristic of a new stage in Russian classicism, which has experienced significant changes under the influence of the ideas of romanticism. The formal elements retain a largely traditional pattern, and the picture as a whole resembles the finale of the classical tragedy, when the actors are located on the stage in beautiful groups.

Its composition is strictly ordered, the figures are placed in a shallow space, parallel to the plane of the canvas, the main character is located in the center. The characters of the picture are antiquized, their postures and gestures evoke antique statues in their memory. The movements and facial expressions of the actors with their emphasized pathetics clearly illustrate the idea of the work. Beautiful ones combine local, without halftones, colors – red, green, blue, yellow. New trends of the century softened strict classical norms in the picture. Bruni gave the event to be portrayed more historical and psychological credibility and, at the same time, emotional tension!