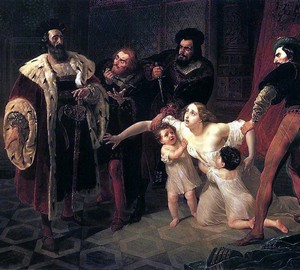 The story of the “Dead Queen” by Inessa de Castro is striking in her drama. Being a court lady, she fell in love with a young infant, the heir to the Portuguese throne, Pedro I. Secretly getting married, they hid such a marriage, which was a frank mezzaline, especially since the infant had a bride.

Having known the real reason for his son’s refusal to marry, King Afonso IV decided to kill his secret wife. But when he saw the unfortunate woman and his grandchildren praying for mercy, he reconciled. It was this moment that Brullov was displayed on the canvas.

The picture is written in a pronounced academic manner – “talking” gestures, sculptural figures. The culmination of the picture is the face of Inessa, highlighted by the author, praying and unhappy. Even more aggravated by the impending impression of children who have become addicted to their mother. The king’s face is unperturbed, but he fears looking at the unwanted daughter-in-law. Only the guard looks indifferently at the ruler and is waiting for his instructions.

It is known that Afonso, who needed his son’s “correct” marriage politically, placed the state’s business above personal feelings, and Inessa was still killed.

After Pedro ascended the throne, he ordered the body of his beloved from the grave to be removed, dressed in royal robes, laid the crown, and all the courtiers to give honors to the dead queen.

Almost 700 years have passed since then, and the tragic story of great doomed love still looks at us from the Brullov canvas.