“The Death of Ivan the Terrible,” Konstantin Egorovich Makovsky – overview of the painting 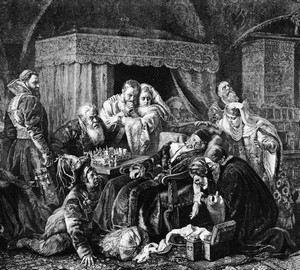 The death of Ivan the Terrible is Konstantin Egorovich Makovsky. Oil on canvas. 82 x 64 cm

For the creation of this and two more paintings on historical subjects, the artist was awarded a gold medal at the Paris World Exhibition in 1889. Unfortunately, the fate of this canvas was sad. She tried to buy for her Tretyakov gallery, but she went into a private collection. In 2014, the picture was stolen, and so far its fate remains unknown.

The plot of the picture is based on the story of the witness of the death of the king – the English diplomat Gorsay. The authenticity of his testimony is doubtful, however, it was popular and used by the artist as a canvas for his canvas.

The picture captures the moment of the king’s death during the game of chess. He is wearing a bathrobe, shawled with fur, and a hat. On the canvas there are many historical people who surround the deceased monarch. The picture is an “instant picture” of the moment of the death of Ivan IV. With the theater inherent in his works, the artist puts together key figures of this action: in the center in a large chair, the king’s powerlessly damped figure, around him his family and associates. On the right, the doctor takes out his drugs in a barren attempt to bring the dying man back to life, on the other hand, a court jester fell at the king’s feet, looking frighteningly at his lord. The last wife of the king, Maria Nagaya, the mother of Tsarevich Dmitry, who was subsequently killed in Uglich, bowed at the head of the head. Behind the queen, Vasily Shuysky prays. The extreme figure on the right is the old hunched nanny of the king, hurrying to him, relying on a wooden key.

To the left of the dying person are depicted other historical characters who will later play their part in the history of Russia. The extreme left, rising to full height, turning sideways to the audience – Boris Godunov. A bearded elder who has arrived in his chair is Bogdan Belsky. Against the background of a magnificent bed with a canopy, a married couple is depicted – Tsarevich Fedor with his wife Irina Godunova, who is frightenedly clinging to her bewildered and embarrassed husband.

In addition to a well-designed, albeit slightly theatrical composition, the picture impresses excellent elaboration of details, even the smallest, as well as perfectly written emotions and facial expressions. According to the remaining lithography, it is difficult to judge the color scheme of the picture, but, knowing the rest of the paintings of the master, it can be safely stated that it was colorful and multi-colored. It is unfortunate that she disappeared, it remains only to hope for a happy return of the stolen canvas.