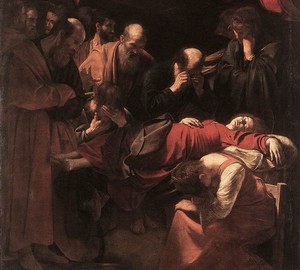 In this picture, written for the altar of the Roman church of Santa Maria della Scala in Trastave, Caravaggio, a reformer, gives his interpretation of the traditional plot of the Assumption of Our Lady. Traditionally, the departure from the life of the Virgin Mary was not regarded as a tragedy, since the Mother of God who survived to old age ascended to heaven after death and reunited forever with her beloved Son.

Caravaggio saw in this plot precisely the tragedy that plunged into the deep sorrow of the apostles. The image of the deceased Virgin speaks too eloquently of the suffering and deadly torment experienced. Her body is written with the degree of realism to which the customers of the work were not ready, in addition, a close acquaintance of the artist, the girl of easy behavior, served as a model for the Blessed Virgin. This caused the customer to refuse the finished picture.