“The death of Pompeii”, Aivazovsky – overview of the painting 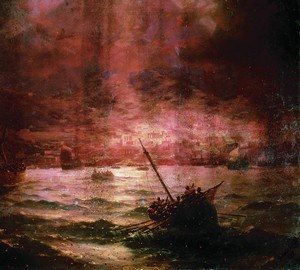 The death of Pompeii is Aivazovsky. 1889. Oil on canvas. 128 x 218 cm
Pompeii, an ancient Roman city at the foot of Vesuvius, died in one terrible day and night due to the eruption of a volcano. During the creation of the picture by the artist, this topic was very popular, because archaeological excavations were carried out at the site of the death of the city, and whole quarters appeared from under the ash layers as if a settlement frozen in time (the picture of another Russian artist on this topic is better known – “Last Pompeii Day” – Brullov).

The artist remained true to his calling – marinistics – and depicted the death of Pompeii from the sea, according to which frightened residents in a panic tried to escape from the riot of the elements. Pompeii and the monstrous volcano are located in the background and serve as peculiar decorations to the events that have played out on the water.

The canvas shows funny and sailing ships crowded with fleeing people who seek to sail as quickly as possible from the shores of a blazing city. The whole picture is filled with a feeling of hot air due to the abundance of bright colors with a predominance of red, orange and yellow tones. An eruption over the city illuminated it and the entire harbor with dazzling unnatural and very frightening light, which makes the sensation of anxiety emanating from the canvas. But the master does not show doom for all the inhabitants of the city – there are many ships in the harbor and they give hope for salvation.