The death of the commissioner, Kuzma Sergeevich Petrov-Vodkin, 1928 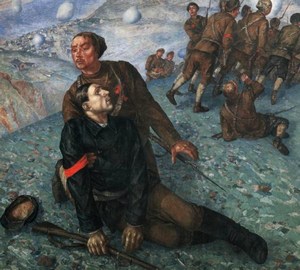 Option 1
The painting “The Death of the Commissioner” is central to the Soviet period of Petrov-Vodkin’s work. Its creation was preceded by such a significant work of the artist as “After the Battle” (1923). One of the main topics for Petrova-Vodkin, the theme of life, sacrifice and death was solved here for the first time in the images of the heroes of the revolution.

The most profound embodiment of this topic is given in the work “Death Commissioner”. The plot of the picture is based on one of the episodes of the brutal fighting of the civil war. A mortally wounded commissioner falls, his heavy body is supported by a Red Army man, a detachment of fighters continues to move forward. However, in accordance with the concept developed by the artist, the depicted scene develops the scope of fact, rising to philosophical, symbolic sound.

The author’s artistic system, his original understanding of the picturesque space and the coloristic system find their full expression in this work. Focusing on the main group given by the close-up, the master opens in the picture a significant spatial depth with distant villages, smooth silhouettes of hills, with a blue ribbon of the river. As if the eyes of the dying commissioner saw this world, as huge as a planet, and at the same time, close and tangible, acutely dynamic and frozen. Petrov-Vodkin refuses the traditional linear perspective. The artist moves the compositional points of view in a strict sequence, as if on the surface of the sphere, which gives him the greatest completeness of coverage. This technique of a spherical perspective plays the role of an artistic metaphor, expressing in a poetic form the author’s philosophical position. The displayed event acquires cosmic universal sound. Here, the key to understanding the purpose of the picture is that the moment of the death of the commissioner reveals the meaning of his life, the meaning of his heroic sacrifice, which affirms the revolution.

Despite all the diversity of the compositional structure, the picture is perceived as a plastic whole. This is largely facilitated by the precisely found relations of the silhouette outlines of the central group, the detachment and details of the landscape, the unity of the rhythmic organization.

A significant role in the figurative solution is played by the color of the picture. All painting is designed in a harmonious combination of bluish-green and fucking tones. The color of the picture emphasizes the depth of space, emphasizes the main plans and groups, helps to feel the lightness and transparency of bluish haze, materiality, weight of objects and figures. A tense, dramatic chord sounds black combined with red in the commissioner’s figure. The balance of the main color planes determines the integrity and decorativeness of the canvas. The solemn beauty of the coloristic system, the artist affirms the moral beauty of the heroes, their feat.

This work summed up many of the picturesque and philosophical quest of Petrova-Vodkin. In addition, it has become one of the staged works of Soviet art.

Option 2
The dramatic work of the “Death Commissioner”, completed in 1928, clearly demonstrates to the audience another thematic side of Kuzma Petrov-Vodkin’s work – sacrifice, death and heroism on the verge of death, all of which are displayed truthfully and honestly, without unnecessary pathetics. The picture was timed to the patriotic date – the 10th anniversary of the Red Army (worker-peasant Red Army).

On the canvas we see a fight. The crushed land of the hills, which is a mixture of clay, sand, stones, dug by ravines, serves as an eloquent decoration of the action unfolding in the foreground. And here, in front of the spectator, the commissar of the detachment, seriously wounded in battle, dies. The dying commander, the Red Armyman supports, while the rest run further into battle, although some look back, trying to understand what happened to their commissioner, who just boldly led them into battle.

It is striking that the entire exposition is devoid of any pathos – soldiers just run, a man quietly fades out on the battlefield. And no recent parting words and speeches. Even a soldier looks very simple and calm – no grief, no moaning, no anger. This is how it happens in battle, and all this arrogant pathetics is far from cruel realities – the painter tells us.

You can neither pay attention to the color color color of the canvas: it seems that a realistic plot is designed in a harmonious fantastic combination of blue, ocher and green tones – such an unusual coloristic interpretation is one of the hallmarks of the artistic style of the painter.

The painting “The Death of the Commissioner” was the most important and bright work of the last period of Petrov-Vodkin’s work. It is known that the master began work on it back in 1927, then the first pencil sketch appeared. For a whole year he went on to search for a hero, compositional solutions and the embodiment of everything conceived on canvas. As a result, the light saw a picture that strikes with its deep drama and ultimate honesty.