“The defense of Moscow from Khan Tohtamysh. XIV century ”, Apollinariy Mikhailovich Vasnetsov – overview of the painting 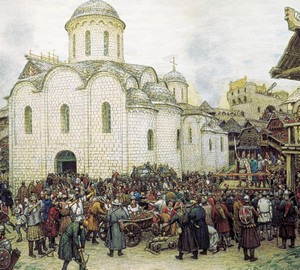 Moscow defense against Khan Tokhtamysh. XIV century – Apollinariy Mikhailovich Vasnetsov. Paper, watercolor, coal. 64.5 x 92 cm
Creating an artistic chronicle of old, Dopetrovsk Moscow, Apollinariy Mikhailovich Vasnetsov could not get around one of the most tragic episodes of her history – the defense of the capital from the troops of the Khan of Tohtamysh. Carefully studying old documents, maps, objects found during archaeological excavations, the artist managed to recreate a reliable picture of one of those days.

Only two years have passed since the victory of the Russian squads on the Kulikovo field, but the troops of the Golden Horde again stand under the high strong walls of the Moscow Kremlin. The city could withstand a siege, because the newly built stone Kremlin was considered impregnable. Taking advantage of the absence of Dmitry Donsky, strife begins in the capital.

And on the summer of August, the evening is going on the cathedral square. On a small elevation, the governor, raising his sword, calls to fight the enemy. Many residents support him: a gray-bearded man dresses the chain mail on the left, and young people pick up bows and crossbows next to him. There is a cart with weapons nearby – all citizens can choose swords, slingshots and shields. The masters, bowing over the first cannons, nicknamed the “tyufyaks”, introduce soldiers to them. Armed soldiers carefully inspect the square.

But not everyone wants to protect the city. On the right, on the chests and bags sits a boyar family, ready to leave the city. Near the church wall, those leaving are trying to get through the crowd on the vines filled to the top with a scarb. The townspeople rush along the wooden picket to the gate, throwing bags of belongings behind their backs and leading the little children by the hand.

And on powerful walls everything is ready for defense – the soldiers took their places, throwing machines are at the ready.

People rustle and worry, but the magnificent white-stone cathedral with high arched windows – a symbol of Russia, solemnly rises in the center of the square.

The brown and gray colors prevailing in the picture fill with a sense of anxiety and approaching misfortune, but the radiance of white walls fixed in the high sky fills with hope and faith that Russia, having passed through all the trials, will become a great power.