“The Demon and the Angel with the Soul of Tamara,” Mikhail Alexandrovich Vrubel – overview of the painting 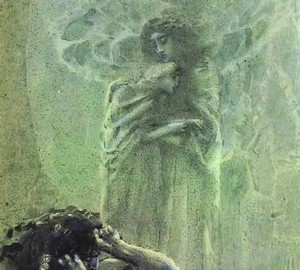 The demon and the Angel with the soul of Tamara – Mikhail Alexandrovich Vrubel. Paper, watercolor.
From a young age, Mikhail Alexandrovich Vrubel was read by the works of M. Yu. Lermontova, and when in 1891 he was invited to participate in the creation of illustrations for the anniversary publication of the poet’s works, he enthusiastically takes up work. And, of course, he begins with the poem “Demon”, because for several years he has been trying to write his image.

Before us is one of the most famous illustrations – a dispute over Tamara’s soul.

In the stream of ghostly, greenish-gray light, an angel stands calmly and majestically, spread wings behind his back dissolve in this unearthly radiance. A girl clung to his chest, seeking protection. Traces of suffering and doubt are visible on a beautiful, sad face, subtle fragile hands in the desperate hope hold fast to the messenger’s clothes.

Towing her head to her, careful, soothing, but at the same time, an angel presses her to her with a confident gesture. His permitted and beautiful face is almost serene, and only light sadness and sympathy revive him. The embodiment of higher, divine justice.

A suffering, defeated demon sits at his feet. In the gesture of despair, he covered his head with strong hands. Unruly thick hair falls on a gloomy face. However, there is no humility in his pose. Yes, he lost, but did not reconcile. Rebel, free and rebellious spirit.

They are similar to each other, these divine entities, like two sides of the same whole: the same unearthly, sublime face, straight thin nose, thick pile of hair. But if one is filled with greatness, light and love, then in another there is tremendous power, internal tension and indomitability. Eternal choice: power over the world and loneliness or fulfillment of divine will and mercy?

A painter writes an angel with the soul of Tamara with translucent, light, inconspicuous strokes melting in the air, choosing cold shades of pale bluish-green and haze-gray flowers. But for the image of the demon, he chooses a muffled gray-black range, however, black paint here does not give a feeling of hopelessness and inevitability.

Vrubel’s illustrations are rightfully considered the best, transmitting the whole depth of feelings and the design of Lermontov’s works.