“The Descent of the Cross,” Jerome Bosch – a description of the picture 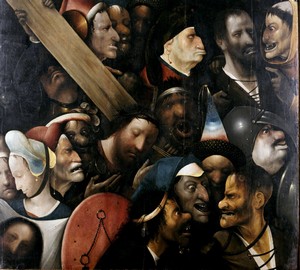 The carrying of the cross is Jerome Bosch. 1490-1500. Board, oil. 85.3 x 76.7 cm
The Ghent painting is one of three created by Bosch under the same name. It uses the classic motive for painting that time – the Way of Christ on the way to Calvary. But this well-known scene has been filed with the specific position of Bosch and only in his one inherent manner.

The picture can be called the collage of images, and images of ugly, even disgusting and monstrous. There is no free space on it and any perspective, only a plane densely filled with the heads of the characters and some details.

The head of Christ with a huge heavy cross made of solid wood on his shoulder is located almost in the center of the picture. It is the semantic center of the work, the focus on which all views are directed. But Jesus Christ himself does not want to look at the disgusting world around him with vile, ugly people who want only his death. He is depicted with his eyes closed, and this is deeply symbolic, completely in the spirit of Bosch.

Another normal human face that stands out from the grotesque monsters is Holy Veronica. Although this character as such is not in the Bible, and her name appeared only as a result of a translation error, Veronica and her legendary boards with a non-manufacturing image firmly entered the Christian mythology. According to legend, this kind woman gave a suffering Christ going to Calvary a clean scarf to wipe sweat. On it miraculously remained the bright face of Jesus, which arose as evidence of his divine origin.

In the picture, the saint is depicted in the corner, she turned away from Christ and gently smiles, holding in her hands a scarf with the image of the Savior, which in the Orthodox tradition is called Spas the Unmanned. She alone, like the son of God, has a normal human face.

The rest who crowded around are terrible freaks. Obviously, the artist wanted to show that the internal ugliness of these people was reflected in their terrible, unattractive, even repulsive appearance. This is an image of triumphant anger, gloating, hatred, small, miserable and insignificant feelings that overwhelm these little people who do not understand the true greatness and size of the sacrifice made by Christ.

Three were crucified at Calvary. The other two are robbers sentenced to death. One of them, with a gray face, is in dismay before the upcoming torments, and the second is an evil creature, aggressively inspired by equally disgusting escorts. The unique presentation of the classical religious motive is characteristic of the unusual creative manner of Bosch, it makes the picture recognizable.