“The End of the Battle of Borodino”, Vasily Vereshchagin – overview of the painting 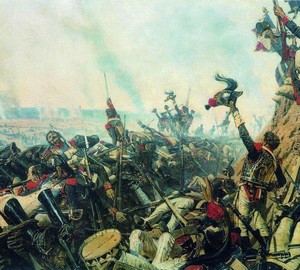 The epic canvas “The End of the Battle of Borodino” by Vasily Vereshchagin, written around 1899-1900, is part of a well-known series of paintings, bearing the generalized name “1812”. The cycle consists of twenty fully completed canvases, as well as a huge number of sketches, sketches and sketches.

The rich life experience and knowledge of military realities at first made Vereshchagin abandon the established canons of writing historical battle scenes. His paintings surprised contemporaries with the lack of a ceremonial gloss and harsh, frank naturalism. To create a realistic, lively canvas artist, a balalist painstakingly studied historical documents, literary sources and military maps relating to the Patriotic War of 1812. Vereshchagin, starting work, sought, first of all, to express his own attitude to the war, a personal look at the events of past years.

All my life, masters have been worried about large-scale, deep problems. In the war, Vereshchagin saw a huge world evil and tried with all his might to express the internal pain, anger and indignation that were associated with the artist’s firm conviction of the immorality of the rulers and generals responsible for the deaths of 80 thousand soldiers during the Borodino battle.

The historical picture “The End of the Battle of Borodino” is the tragic result of the battle of Borodino. In the foreground are the soldiers of the Napoleonic army, who occasionally glorify their emperor, standing on the embankment of the captured redoubt. A terrible contrast is the central plan of the picture – the moat before the fortification is literally littered with human bodies. A bloody mess of the wreckage of weapons, uniforms, arms, legs, people distorted by suffering and deadly flour is a crazy, bitter and senselessly high price for the ambitions and ambition of the French invader adventurer.