“The end”. The last days of the Nazi bet in the dungeon of the Reich Chancellery, Kukryniksi 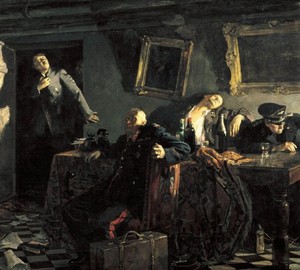 “The end”. The last days of the Nazi bet in the dungeon of the Reich Chancellery – Kukryniksi: M. AT. Kupriyanov, P. N. Krylov, N. AND. Sokolov. 1947-1948. Oil on canvas. 200×251
Kukryniksi is the only one of a kind triple community of artists. Friendship and joint work of Mikhail Vasilievich Kupriyanov, Porfiry Nikitich Krylov and Nikolai Alexandrovich Sokolov began with his students. The circle of activities of Kukryniksov is very wide and diverse. The authors of large thematic picturesque canvases, they also write chamber lyrical landscapes (each separately), illustrate the works of classical literature. But most of all, Kukryniksi are known as wonderful masters of political satire. In the poster, “Oknah TASS”, on the pages of magazines and newspapers during the Great Patriotic War, their cartoons appeared, mercilessly stigmatizing Hitler and his minions, moral insignificance, the bestial essence of these grief-conquerors .

Therefore, quite naturally and naturally, artists in the days of victory over fascist Germany had a desire to show in their new picture with all the reliability the well-deserved end of the “heroes” of their cartoons. To this end, they visited Berlin, carefully studied historical materials, went down to the shelter, where Hitler hid in the last days of the war. The Kukryniki sought to convey as convincingly and more accurately as possible the state of the fascists who understood their imminent end at the moment when a volley of the Soviet gun rang over their very heads, which crushed, destroyed the appearance of comfort established in the shelter, the illusion of the possibility of salvation, making it clear to feel the whole reality of what was happening. This salvo made the demoniac Fuhrer jump out of his personal bunker. His miserable figure with convulsive movements, a fear-crippled physiognomy, is abruptly torn out of the glow from the gaping blackness of the doorway. Behind him, frightened Goebbels is barely noticeable. In the room where the bodyguards of the Fuhrer are sitting, no one thinks about him, there is no business for anyone, everything here speaks of the inglorious end of the fascists.