The erection of the cross, Peter Paul Rubens – a description of the picture 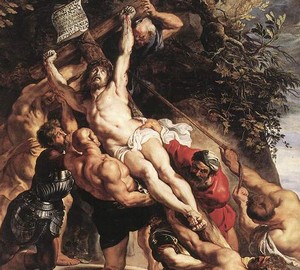 The Triptych “Cross Movement” was completed in 1610 and brought Rubens the long-awaited glory. The idea to embody this plot on the canvas came to the painter back in Italy, however, he could only get to work upon returning to his homeland, to Flanders.

Speaking about the outstanding picture of an outstanding artist, first of all, I want to emphasize that it is unusual in this work, and there really are enough revolutionary innovations here. Firstly, the plot itself – paintings related to the crucifixion of Christ, before Rubens, illustrated the already accomplished action – Christ was executed. For the first time in religious painting, Rubens made the viewer a witness participating in this dramatic scene.

Secondly, Rubens deprived the static of the canonical plot of the persons present here. The work is full of dynamics, which is embodied in the tense muscles of soldiers, violently, almost frantically erecting the cross. Christ Himself is not represented as a holy martyr, humble and calm, but a great creator of his destiny, who stands above everything that happens. His hands are not helplessly pulled to the sides, but raised up above his proud head. The viewer can see how much his muscular body is tense.

The central part of the triptych is dedicated to the protagonist – Christ. The left panel depicts a grieving mother, Joseph and other people. The right side depicts two criminals who are being prepared for the monstrous execution.

The whole composition, thanks to the color scheme, resembles a live wave that picks up and hovers the cross. Restless glare, light spots, sharp lines and create a dramatic impulsive movement. At first glance at the picture, every believer with mixed feelings of pain, guilt, sorrow realizes what a great sacrifice Christ made in the name of mankind – this was what Rubens sought.

After writing this picture, Rubens was called the “god of the painters.”.