“The Fall of Angels,” Peter Braigel the Elder – Description of the picture 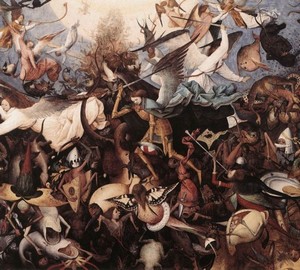 The Fall of Angels – Peter Braigel the Elder

In the center of the panel is the figure of the Archangel Michael in armor. Skillfully working with his long sword and shield with a red cross – a symbol of the Resurrection (the final victory of Christ over evil), Michael defeats Satan and the army of angels who in their pride rebelled against God. The rapid fall of the rebels from heaven is emphasized by randomly overturned figures, as if fascinated in the abyss that has opened from radiance in heaven, as well as by energetically circulating angels in white robes, defeating the army of Satan. Angels who fell in the darkness take bizarre demonic forms, and Satan himself, who turned into a dragon, is trampled by the feet of Michael.

MIKHAIL. The archangel Michael is often depicted in armor fighting Satan, who sometimes takes the form of a dragon, for example, Durer, or a beautiful young man with wings, like Piero della Francesca. In the scenes of the Last Judgment, he usually holds the scales on which he weighs the souls of the dead.