The family of a merchant in the XVII century, A. P. Ryabushkin, 1896 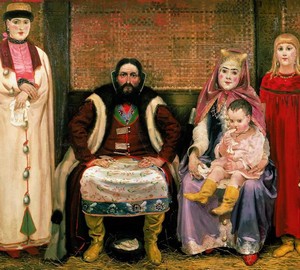 The family of the merchant in the XVII century is Andrey Petrovich Ryabushkin. 1896. Oil on canvas. 143×213
Creativity A. P. Ryabushkina (1861-1904) is entirely devoted to the history of Dopetrovsk Russia. Thanks to the artist’s love for life and culture of the 17th century, his close study of the ethnographic features of different lands of Russia, the situation of houses and costumes, as well as the immersion in the original Russian traditions and customs, not broken by the era of the transformation of Peter I, the world of the past was recreated.

A portrait of the Moscow merchant family is presented by Ryabushkin as a group photograph familiar to the end of the 19th century. In the center of the canvas sits a stately merchant – the head of the family, depicted by the artist in a position full of self-sufficiency and the authority of a strong owner and a successful merchant. The elegant merchant with the child in his arms is friendly and sweet, despite the too arrogant eyebrows and a face painted according to the fashion of that time by the blush. The heroes of the canvas create a rather static composition, where only the liveliness of a child gnawing at the kalach brings some dynamics.

The painter’s attention is focused on the exact fixation of clothing materials, the nature of the pattern and the decoration of the outfits. Studying the works of I. E. 3abelina and N. AND. Kostomarova, working in the Historical Museum, Ryabushkin created a real, historically true illustration of the life of Dopetrovsk Russia.