“The fascist flew by,” Arkady Alexandrovich Plastov – overview of the painting 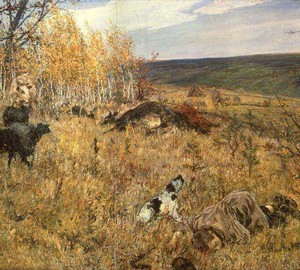 1943, Tehran Conference. In the hall where the heads of state sit, this dramatic picture hangs for the soul. It is believed that she made such an impression on U. Churchill and F. Roosevelt, which became one of the arguments that influenced the opening of the second front. AND. AND. Plastov wrote it in 1942. There was a heavy bloody war, not sparing either soldiers or civilians.

Autumn. White fluffy clouds float across the high blue sky. A small grove of thin white-barreled birch trees is located on the slope on the left side of the canvas. Bright yellow, golden-red leaves flutter in the wind. The warm sun warms the earth. A wonderful quiet day. But you should peer – and you feel how goosebumps start running on the skin.

Right in front of us, in the lower right corner of the picture lies a small shepherd, awkwardly twisting his hand. Thick legs pressed in dark pants. Old faded gray-brown clothes are not noticeable among the red-headed, dried grass. Deadly pallor spills over the baby’s face, blood flows down the ground through dark brown hair. He rolled away towards the whip, falling out of his hand, a hat flying off his head.

A bright spot in the foreground of the canvas is a small shaggy black and white dog. She howls dreally, lifting her face to the sky, where a silhouette of a fascist plane melts in the blue. Flying over a peaceful earth, he released a line of machine guns – and never run to the baby on the ground. The sound of the motor subsided, the dead cows remained lying on the hill, the surviving sheep went astray, breathing in the air anxiously.

And around the still endless expanse of greenish winter fields, a high haystack, the road, souring from the rain, leads to the horizon. Brown bushes of bushes and small gently green Christmas trees stand out against the background of yellowed grass. And only howling dogs violates the silence of autumn day.

Muffled, non-small colors, cold bluish-green tones, calm yellowish-olive and gray-brown shades give rise to feelings of sadness and compassion. When looking at the canvas, you acutely feel the tragedy and horror of the war, but at the same time there is growing confidence that the Russian people will survive in this struggle. The picture calls for this to never happen again.