“The formula of the Petrograd proletariat”, Pavel Nikolaevich Filonov – overview 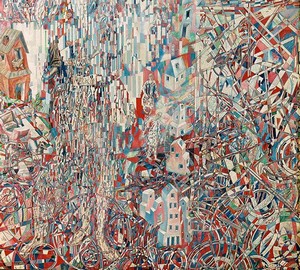 At the initial stage, the artist enthusiastically took the change of regime, considering this period a time of global change for the better. He even took an active part in the revolutionary movement and held a leadership position in the Executive Committee. Subsequently, Filonov was disappointed in the new government. He could not accept bureaucratic principles that absorb the personality of man.

The artist expresses his “formula” of the movement of the proletariat with the help of the brush. The canvas consists of mosaic fragments, which are geometric shapes, parts of the human body.

The center of the picture is filled with vertical lines, thanks to which the total composition is pulled up. There is the appearance of a vortex pillar where houses and people are pulled together. Some of the characters enter the entire stream, others only part of their understanding. At the edges of the work, circles resembling a seething of water are outlined.

On the left side of the canvas, small particles are pulled into a huge ghostly female figure. With a long view of the picture, the image either grows or becomes smaller. Different hand gestures in the upper corner of the canvas may indicate the creation of a new world.

Blue shades predominate in the work, and not at all the characteristic red color of the proletarians. In the author’s view, revolution should lead to a brighter future. Society must breathe the transparent air of freedom. It is with such an atmosphere of freshness that the picture is filled.

After the first show, “The Formula of the Petrograd proletariat” at the exhibition, critics described Filonov as “not an artist of small episodes, but of cosmic events”.