The Four Apostles, Albrecht Dührer – overview of the painting 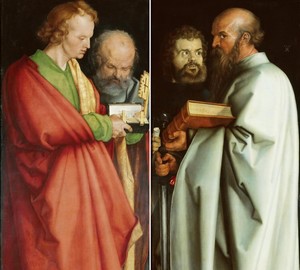 The four apostles are Albrecht Durer. 1526. Oil. 215 x 76 cm
Two vertical boards fastened together with the image of the four apostles John, Peter, Paul, Mark is perhaps the most significant work in the work of the artist Albrecht Durer, one of the greatest representatives of the German Renaissance.

For a painter, these are not just biblical heroes – Dührer sought to portray four people who demonstrate the perfection of the mind, character and spirit. Here everyone is individualized and unique. It is generally accepted that the master through the apostles accurately passed four types of temperament:

Also in the art literature you can find a comparison of the apostles with different seasons or 4 different ages.

Here the viewer sees not only those significant innovations that characterize the work of Dührer as a whole – the personalization of biblical heroes, the dynamism of images, attention to details, but also the philosophical ideas of the master, a kind of illustration of his human ideal. The artist believed that a perfect person, one who is spiritually rich, has will, is ready for action. He tried to portray all these high ethical standards in the apostles. Indeed, noble calm is read in their images, coupled with a living character and a sharp mind.

Divided into different sash, the work, meanwhile, looks indivisible both in compositional and spiritual terms. It is known that after the completion of the diptych, Dürer presented it as a gift to his hometown of Nuremberg, but evaluating the skill of the painter, the city Council decided to pay the author money for such a perfect gift.