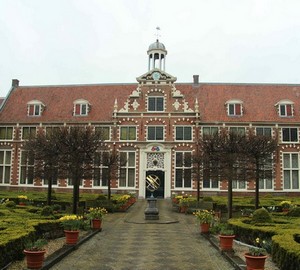 The city of Haarlem for centuries was one of the most important economic and cultural centers of the Netherlands. Of its past prosperity is reflected in numerous old buildings, still with the surrounding plains and is visible from a distance a towering mass of its medieval Cathedral. In contrast to the nearby Amsterdam or Rotterdam quickly overgrown Harlem today has become a major industrial city. It is behind the century, but largely preserved not only the old layout, but the buildings of the XVII century.

One of the most interesting buildings in Harlem — a former almshouse built in 1608, the outstanding Dutch architect Lebanon de Kay. Outside, from the street, it is not much different from the surrounding is almost the same old modest brick building. Gates, as a corridor, across the interior of the building. Going through them, you find yourself in a peaceful and harmonious proportions of a square courtyard. In the surrounding brick wall, decorated with only two rows of Windows allocated to the main portal, which is directly against the arch of the gate. Passing through this portal and lobby for them, are included in the spacious room, once probably served for the meeting of the “Regents” by rich Trustees of the almshouses. In 1664 two of their group portrait was painted by Frans Hals. The old artist could consider this a profitable order a big success. He, however, was not charity people in this place, but was so poor that he received assistance from the city. Now we are reminded of the Lord Regent just because of Frans Hals once wrote them, and the old alms-house became a Museum in his name.

As mentioned, the art Museum was founded in Harlem in 1862. In 1906 the city Council bought the building Lieven de Kay. The monument of the same era that the main core of the Museum’s collection, this building is not just a repository, but also the perfect aesthetic backdrop for works by Harlem artists.. In accordance with the new appointment, it was rebuilt inside, and in 1913 it opened the Museum by name of Frans Hals.

This time we have no state Museum of national artistic culture in Amsterdam, and not “Cabinet” of individual outstanding works in the Hague, and Stedelijk Museum. Collected here are mainly works of local painters from the XV to the early XIX century.

Group portraits by Hals is the greatest treasure of the Museum. They were once ordered to him by members of the infantry companies or the Trustees of the charities of Harlem, became the property of the city and was in the city Museum.

In the main hall of the Museum located behind the main entrance, hang four group portraits shooters written by Hals in the 1620-1630-ies. Next put two or three of the same portrait of his contemporaries. Thus, the hall resembles that of the infantry Guild room, decorated with traditional images of its members.

Artworks of Hals are not gathered in one hall, and placed in different sections of the exhibit and surrounded by works of other artists. They are perceived not only as monograficheskoe successive stages of personal creative development of the master, but also as stages in the history of the Harlem school of painting. In each of the sections of the collection are the works of Hals comprise the main core. Shown together with portraits shooters of the late XVI century giant canvas 1616 serves as a powerful introduction to the XVII century. The brilliant series of group portraits 1620-1630-ies, placed in the Central hall along with several similar works of his contemporaries, defines the character of not only this part of the exhibition, but to a great extent and the entire collection of the Museum in the representation of the visitor. After a few more halls, he finds himself face to face with two group portraits by Hals in his old age. It’s the Regents and Regent of the Harlem almshouse (1664). Two dark canvas hanging against Each other, and the viewer, looking at them, could hardly believe that they were written by the same artist as the banquets shooters.

The Museum exposition ends on the later portraits by Hals. You can go from one room to another, consider painting Harlem painters of the late seventeenth, eighteenth, early nineteenth century. Many of them are good and offer genuine Dutch thin understanding of beauty pale color, built on close color relationships. However, it is better to come another time to give them the attention they deserve. After the works of Hals, it is impossible to focus on coloristic subtleties and to take seriously the peaceful river views, expertly chosen still life, swept clean city square and thoroughly cleaned the rooms depicted in these paintings.