“The girl in the poppy wreath with cloves in her hand,” Kiprensky – overview of the painting 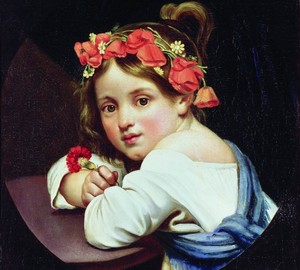 The girl in the poppy wreath with cloves in her hand is Orest Adamovich Kiprensky. 1819. Oil on canvas. 40 x 42 cm
The talent of the portrait artist allowed Orest Kiprensky to experience both moments of complete triumph and glory, as well as a sense of bitter hopelessness. The magnificent works of the master gained wide popularity not only in Russia, but also far beyond its borders. A separate and very important page of Kiprensky’s biography is the period of life in Italy. Local academics hardly believed that the canvases presented to them were created not by one of the great Italian masters, but by their contemporary, Russian portrait painter. It was here that popularity came to him, it was here that his name acquired notoriety.

The portrait best known as “The Girl in the Poppies with Clove in the Hand” was written in Italy with a child named Anna-Maria (Mariuchcha). The artist was sincerely attached to the girl, which at one time caused many rumors of various kinds. Kiprensky was forced to return to his homeland, but seven years later he returned to Rome and tracked down a young girl. For the sake of marriage with Mariuchy, Orest Kiprensky adopted the Catholic faith, however, the marriage did not last long – a few months after the wedding, the artist suddenly died of pneumonia.

Whatever the background of this picture, the skill of its author remains especially valuable. Mariuchcha sits with a laid-back grace leaning on the table, as if by chance turning an interested look at the viewer. A poppy wreath aches on dark-haired, carelessly cleaned hair, and in a chubby handle the baby holds a cloves flower. The face of Mariucci is most carefully written out – with a light blush, living, emotionally expressive, with deep and attentive eyes. The gentle, clean and defenseless image of the girl is subtly transmitted to Kiprensky using a contrast of dark background and a luminous, pink-farfor tone of the skin of a small model.