The Grand Mascarad in 1722 on the streets of Moscow with the participation of Peter I and the Caesar Prince I. F. Romodanovsky, Vasily Ivanovich Surikov 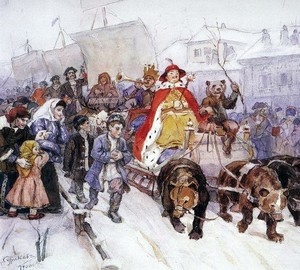 The Grand Mascarad in 1722 on the streets of Moscow with the participation of Peter I and the Caesar Prince I. F. Romodanovsky – Vasily Ivanovich Surikov. 1900. Cardboard, watercolor, Italian pencil

This air watercolor pleases with bright colors and clearly reflects the morals that prevailed during the reign of King Peter I. In the entertainment that you wanted to know by order of the ruler, a mixture of old-Russian and new-fashioned, foreign is noticeable. Here are classical folk festivities with bears and pans, and parades with jesters brought from abroad.

The composition of the picture is interesting and rather unusual for the traditions of the image of the royal person. The king is not in the center of the canvas, as was customary on the canons, but somewhere on the side, among the crowd, dressed in the same inconspicuous dress as most of the people who were about to stare at the outlandish sight. The only difference is the king’s huge growth, his overseas outfit and his characteristic, recognizable appearance.

In the center of the picture is the prince-kesar Romodanovsky, dressed in the royal ala, knocked down by ermine, mantle and hat, with a scepter and in a cast of golden robes. Near him, a mummers, dressed as a bear with brushwood in his hand, sits on a irradiation, and real Russian brown bears drag the harness.

The picture depicts a mass of people, each image is a separate character and character. Even in such a sketch image, the hand of the master is felt, the ability to easily convey the sensations of movement, the dynamics of a large number of people.