“The Great Peter, thinking about the construction of St. Petersburg,” Alexander Nikolaevich Benoit 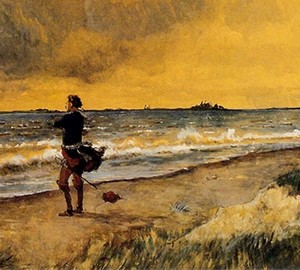 Peter the Great, thinking about the construction of St. Petersburg – Alexander Nikolaevich Benoit.

In the history of Russian culture of the late 19th century and the beginning of the 20th, Alexander Nikolaevich Benoit occupies a special place, it is a rare phenomenon that incorporates the whole diversity of creative activity. Art critic, writer, illustrator, art critic.

But he is also a gifted artist, whose watercolors have their own unique charm, both in execution and in the plot. One of them is Peter the Great, thinking about the construction of St. Petersburg, written in 1916.

The watercolor is made by an art nouveau or modernist. It looks very organic, with a simple and natural composition, in the characteristic style of muffled color scheme, in tobacco shades that emphasize the severity of the cold edge.

The theme of Russian history is dear to the heart of Alexander Benoit, so he often returns to Pushkin images, including the plot of the copper rider.

How unusually masterfully this epoch-making moment is captured by the artist. The figure of Peter the Great, tall and decisive, proudly and lonely stands on the shore. She is all striving into the distance, into the future, which no one except Peter himself sees. He is passionate about his dream and does not notice either heavy clouds, or cold waves, or a shaky wind. He sees the city of dreams, the city of his whole life.

The people who came with him do not have such faith and such fortitude, they are cold and not clear what can attract a sovereign in this deserted, windy place.

Thanks to the artist’s talent, the viewer suddenly comes to the idea that the artist depicted exactly the very day in the picture when King Peter I had and took on real outlines of a brilliant plan for the construction of the northern city. What exactly began St. Petersburg, which later became the most beautiful and impressive city in the world. On the banks of desert waves …