“The groom choosing the ring of his bride,” Ivanov – overview of the painting 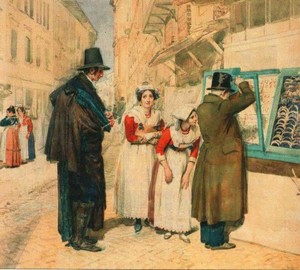 The groom choosing the ring of his bride is Alexander Andreevich Ivanov. Watercolor on paper.

The famous painter Alexander Andreevich Ivanov is a representative of Russian classicism of the 19th century. His paintings are stored in many museums of the world and, of course, in museums of St. Petersburg and Moscow.

The artist spent most of his life in Italy, where he worked hard, wrote sketches and landscapes.

Maybe under the influence of Nikolai Vasilievich Gogol, whom they met in Rome in 1837, Ivanov began to try himself on a genre topic, although he had not previously recognized it, he considered it unworthy for classical painting.

So, the genre scene is revealed in one of the light and bright works of the artist Alexander Ivanov, written in 1839 – “The groom choosing a ring for the bride.”.

The painting was made in watercolors, which, incidentally, is also unusual for Ivanov. But he, as a real talent, discovered for himself and was able to use all the most expressive possibilities of watercolor writing.After all, it is the genre scenes that presuppose a particularly reverent attitude of the author to the image of sunlight, light, air and their interaction with color. And that if not watercolors will convey all the facets of the game of light and color.

The plot of the picture is very simple: the central figure is the groom, young, with self-esteem, with coins in his hands, picking up jewelry for his bride. He smiles slightly, probably imagines how she will rejoice and admire the ring.

Curious girls are very picturesque – they are wondering what decoration this beautiful young man will choose, and at the same time they feel a slight envy of the unfamiliar bride. A jewelry merchant is important and leisurely, he is confident in his product.

The author perfectly discharged each character individually and at the same time they are united by a common, fascinating event taking place on this street.

Thanks to the watercolor brush, there is a special transparency of the sky, the ease of summer, warm day. And all this everyday street scene is filled with pleasant human emotions, liveliness, brightness of the southern Italian town.