“The heyday of the Kremlin. All-Holytum Bridge and the Kremlin at the end of the XVII century ”, Apollinariy Mikhailovich Vasnetsov – overview of the painting 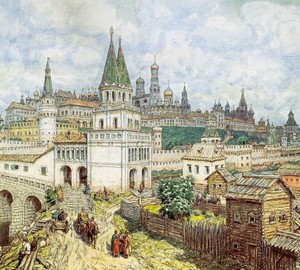 The heyday of the Kremlin. All-Holytum bridge and the Kremlin at the end of the 17th century – Apollinariy Mikhailovich Vasnetsov. Oil on canvas. 155.3 x 284.5 cm
The end of the 19th century, in Russian art, interest in the history of their native country is unusually high. Many artists turn to the creation of historical paintings, among which the picturesque canvases of Apollinaria Mikhailovich Vasnetsov stand out with their reliability.

He is passionate about the reconstruction of the appearance of ancient Moscow, he studies old maps, Moscow archives, participates in archaeological excavations. The master especially liked to write views of Moscow of the XVII century, because this period was most known.

This picture of him belongs to a large group of graphic works created by him for the Moscow Communal Museum at the beginning of the 20th century.

Summer sunny day. On a green hill there is a majestic Kremlin, surrounded by a defensive wall with teeth similar to a lastochkin tail. Against the background of the blue sky and the white fluffy clouds floating on it, the makos of numerous churches are clearly visible. A large dome of the Arkhangelsk Cathedral is golden, proudly rises above all the buildings of the Ewan the Great bell tower.

In the center of the picture on powerful supports stands the very first stone bridge leading to the Borovitsky Tower and called the All-Holy. Stone shopping malls are built on it, and at the very beginning there is a snow-white pre-fridge tower decorated with high windows and two green roofs.

The roads leading from the six-pass gates are still being built – they are laid with heavy logs. A sailing ship moored on the steep coast, men overload heavy bags into the cart. Workers in white shirts rest nearby, something hotly discusses the hawk in bright rich clothes. On the right, behind high fences, there are wooden houses.

Pure, transparent shades of blue-green, yellow, light orange and sand colors of watercolors emphasize the gentle radiance of snow-white walls and towers, their solemn beauty and ease. A magnificent view of the Kremlin delights, filling with light and joyful feelings.