“The Holy Family with St. Catherine,” Husepe de Ribera – overview of the painting 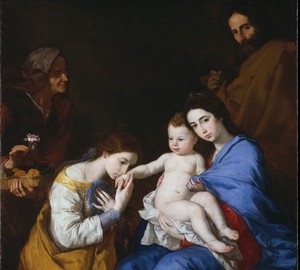 Born in Spain, Husep de Ribera (1591-1652) lived most of his life in Italy, first working in Rome, and then with the Neapolitan royal court. The painting of Caravaggio with its contrasts of light and shadow, as well as characters who came from the street, but at the same time full of greatness and natural beauty, had a strong influence on his work.

The scene of the betrothal of St. Catherine with Christ (the mystical betrothal, as a result of which Catherine becomes the “bride of Christ”) is illuminated by a bright flash of light that snatches the main characters from the twilight. Such a technique, like draperies lying in large, free folds, gives the work a shade of theatricalization, to which the painters of the Baroque era were inclined. And at the same time, this work is filled with living human emotions: the Mother of God gently and anxiously bowed her head to the Baby, St. Catherine with a warmth kisses His hand. The faces of St. Catherine and Our Lady, as well as their movements, are beautiful and gentle, but restrained. Strictness and sentimentality were distinctive features of the work of most Spanish artists of that time.