The house-Museum of Rembrandt in Amsterdam, Holland 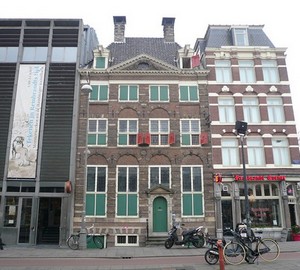 In 1606, the city of Leiden, in Holland, in the family Miller was born Rembrandt Harmenszoon van Rijn. Since childhood he was fond of painting, studied with masters Jacob Swanenburgh and Pieter Lastman. In 1631 Rembrandt moved to Amsterdam, where, being in the Zenith of his fame, bought the house which later to be poor, was forced to sell it for the debts from the auction.

In 1911, by order of Dutch Queen Wilhelmina, in a house that had recently been restored and opened the house-Museum of Rembrandt, where exactly the restored apartments of the Grand master, recreated the historical situation of the time: living room, kitchen and workshop where the artist worked.

The true biography of Rembrandt in the Museum’s exhibits are surviving thanks to the inventory made for the auction notary. The Museum presents drawings from the collection of prints and copper plates by the master himself, some lovely self-portraits and portrait drawings of the parents of Rembrandt.

Along with them, in the halls of the Museum exhibited the works of his students and contemporaries of the artist, which was inspired by the art of the great masters. In our days, the house-Museum of Rembrandt takes a large number of visitors – fans of art the genius of the painter. The Netherlands is the birthplace of many great artists, their priceless works are exhibited in famous art galleries in the world, not least in this list are in the museums of Holland. Among all the cities Amsterdam is rightly the highest number of museums.