“The king walked in any weather,” Alexander Nikolaevich Benoit – overview of the painting 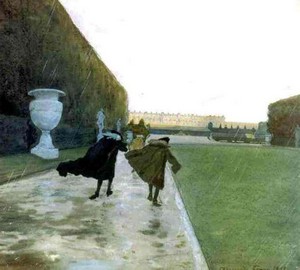 Two main historical topics in the artistic work of Alexander Nikolaevich Benoit can be traced through his whole life. They are dedicated to France (Versal of the time of King Louis XIV) and Russia (St. Petersburg, Moscow).

Over the past life, Benoit has written more than 600 (!) paintings about Versailles. This is gouache, and watercolors, and engravings, and many sketches and sketches. He is fascinated, inspired, “obsessed” with his parks, statues, “visions” of the figure of King Louis XIV (according to the artist himself).

The image of the sun king, in “Last walks of Louis XIV. The king walked in any weather ”, written in 1898, is certainly inspired by Alexander Benoit with historical texts, letters and engravings of that time.

According to Benoit himself, he seems to have “not fantasies, but memories” on the theme of the king of France. He sees these silent shadow people who walk along the paths past the fountains. He sees a king who loves to walk surrounded by his courtiers. The king is already in old age, but his walks are not canceled in rainy, rainy weather.

The king likes these promenades, the surrounding landscape probably visits images and events, memories of his former greatness, of the monarchy, of young years …

I wonder how the author of the king depicts from the back, and the viewer does not see the face of the sovereign. Maybe Benoit thus showed the departing, fleeing king as the passing era with him, which is rapidly disappearing? Or as an actor who needs to leave the stage and give a new place?

After all, the artist, with all his enchantment by Versailles and the personality of Louis XIV, perfectly understands that that time has already sunk into oblivion and has gone into infinity.

The works of Alexander Nikolaevich Benoit about the divine Versailles are original, inspirational, poetic and romantic, but at the same time sad and sad.