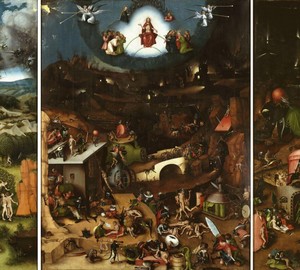 The Last Judgment is Jerome Bosch. 1504. Wood, butter. 163.7 x 247 cm
The theme of the Last Judgment is a common motive in art, but before Bosch, and after that no one could portray the reckoning of mankind for sins so fantastically and extraordinary. If the picture of Bosch is impressive for a modern person, then what about his contemporaries. These people probably thought that the artist saw the monsters of hell with his own eyes, because it was extremely difficult for people to suspect that someone could invent this, at that time.

The picture consists of three parts, that is, triptych, also very often used in church art, especially during the Middle Ages. The distribution of “roleas” in triptych is also quite traditional: in the middle is the Last Judgment itself, on the left is Paradise, on the right is Hell. But this tradition ends, and Bosch begins.

If it were not about the very beginning of the 16th century, triptych could be freely accepted for the work of a surrealist artist from our time. Bosch has no restrictions on proportions, spatial configuration, perspective or compatibility of objects. What a prospect in hell? Everything seems to be a monstrous pile of creepy images, so the picture should be considered literally by centimeters.

Carefully considering this image, you can understand the attitude of the artist himself to his surrounding reality. The traditional division of the picture into parts: the upper – heaven, the lower – the earth turns out to be uneven. Two-thirds of the central board is occupied by the image of sinners who go to hell, and only one-third is devoted to heavenly existence.

This upper part is traditional – in the center of Jesus Christ, his mother is the Virgin Mary, the intercessor of sinners in front of her divine son, trumpeting angels and a miserable handful of righteous at the bright throne. It is not thick in heaven with the inhabitants, because the vast majority of people turn out to be sinners who have landed directly in hellish crucible.

The lower part of the picture is made with dark colors to emphasize the gloom of what is happening. Here, the most surrealism begins. To evaluate the artist’s imagination, you will need to be at least a clinical psychiatrist.

Here is genius (or madness?) the master manifested herself in all her glory. Sometimes his characters are so figurative that it is almost impossible for a modern audience to guess the true meaning that the artist put into the images. Nevertheless, hell turns out to be a crowded place, which makes the position of the Bosch clear: humanity is sinful in nature and almost everyone after death will find this terrifying place with knives, spears, torture and hellfire.

Those who hoped for a favorable image of a paradise garden with flowers and birds will be brutally disappointed. Bosch has no idyll. Instead of pastoral scenes, he depicted several scenes, again related to the fall: the temptation of Adam and Eve, their expulsion from paradise, the rebellion of fallen angels led by Lucifer against the Lord and their overthrow into hell.

Bosch’s artistic and semantic techniques are so unusual and interesting that even after several centuries of his work remain popular and widely known. References to the “Past Judgment” are found in many works, not only in paintings, but also in literature and cinema. This is the best monument to the great and terrible Jerome Bosch.