“The likely appearance of the White-Stone Kremlin Dmitry Donsky. The end of the XIV century ”, Apollinariy Mikhailovich Vasnetsov – overview of the painting 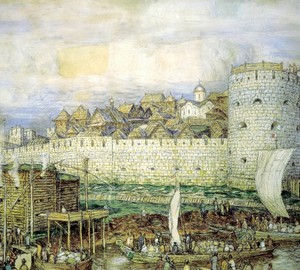 The likely appearance of the Belokamenn Kremlin Dmitry Donsky. The end of the XIV century – Apollinariy Mikhailovich Vasnetsov. Paper on cardboard, watercolor, coal. 51 x 80 cm
Thanks to the historical drawings of Apollinaria Mikhailovich Vasnetsov, we can see ancient Moscow, its streets and temples, see how it changed from century to century, turning into a beautiful city in which many ancient monuments have been preserved.

Despite the great preparatory work, the artist did not always manage to restore the completely real image of the capital, however, excellent knowledge of history and architecture helped him write works saturated with the lively spirit of the past tense, although the word “probable” was added in their name.

The second half of the XIV century. The wooden fortress was destroyed several times by fire, so the new one is erected from white stone, and Moscow has been called white stone since that time.

The construction is almost complete. Strong walls, the thickness of which is visible through small arched windows-fighters end with rectangular teeth. Long boards raise to the very top of the towers, adjusting the roof. On the left is a powerful quadrangular Borovitskaya pass tower. Its gates are wide open, the drawbridge is lowered through a deep moat dug around the Kremlin.

A magnificent panorama of the fortress opens from the coast of Neglinna. Sunlight dyes the white masonry into warm pinkish-beige shades. The yellowish-brown roofs of tall wooden houses are hanging on the hill, between which the cathedrals – Arkhangelsky and Uspensky are clearly visible.

And life is seething next to the Kremlin walls. Large loaded boats, low in water, one after the other, pester the shore. Some, lowering the sail, approach high bridges, where workers are already waiting for them, lowering down the ropes of lifting machines similar to the well-cranes. Other rooks rush to low board berths leading to the covered malls, where many merchants are waiting for their goods.

You can look at the drawing for a long time, finding new details and the smallest details that the artist transmits with such skill clear, verified lines and strokes.

Thanks to the translucent shades of warm pale brown, light yellow, bluish, green and cream paints, the picture is filled with light and spaciousness. The sense of reality does not leave what is happening, the poetic image of Moscow delights with its beauty.