“The Lord of the Night”, Rech – overview of the painting 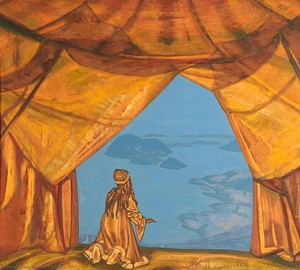 Nikolai Konstantinovich Rerich sincerely believed in a sacred feminine. He believed that the 20th century is a new era of the universe, or the age of Mother of the World. This is the era of recognition of a woman and her creative mission in the world. Relying on the postulate of holiness of female energy, Nikolai Konstantinovich consulted with his eternal companion and wife, Elena Ivanovna Rerich, in everything. Such a worldview was displayed on his works. A whole series of “female paintings” was created among which the “Lord of the Night” of 1918.

At that time, Rurich was engaged in educational activities in the United States. He wanted to present Russian culture to the masses abroad. In America, his work was warmly received and the painting “The Lord of the Night” is still stored in New York.

In the tent there is a girl kneeling with her back to the viewer. She seems to be expecting someone or calling. Twilight thickens and it seems as if a mysterious “power of the night” should come into visit. What is the purpose of this invisible guest? What did the author mean? Perhaps this is a Far Eastern spirit, can personify the night, or maybe the male character that female energy needs. The artist decided to keep this a secret, but given his love of mysticism, a special subtext of the picture is likely.

It is amazing how the master conveyed such a rich multi-level composition with a combination of only two main colors. The whole tent and silhouette of the girl are completely depicted in golden tones. The light game allowed the creation of a glossy texture of gold fabric. And only the way out is shrouded in blue fog.

These two colors are very shading apart, it seems as if the entrance to the housing is leading to another world.

It is worth noting that the viewer is poorly visible on what the tent is, since the earth is almost invisible, as if the heavens occupied the whole space, which seems to be floating in the air.

Also with the horizon, its lines are not visible, the sky merges into a single substance with water surface.