“The Martyrdom of St. Florian”, Albrecht Altdorfer – overview of the painting 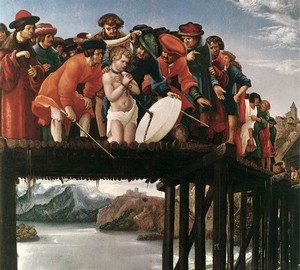 The work of the German Renaissance artist and the head of the Danube school Albrecht Altdorfer was part of a large picturesque cycle, now dispersed to various museums and representing scenes from the life of St. Florian.

The sacred tradition states that this Roman soldier, who lived in the III-IV centuries, secretly accepted Christianity and tried to save Christians from execution in the Upper Austrian lands, for which he was sentenced to death. He was tied a stone on his neck and thrown into the river.

Altdorfer depicted Florian on a bridge kneeling, with a huge millstone tied to his neck. Tormentors crowded around and just onlookers. The artist presented the whole scene seen from below, which is why an exciting landscape opens in the passage of the bridge: the clear waters of the river, forming vortices around the supports, long blue mountains drown in the solar haze, the castle is visible on top. The world in Altdorfer’s paintings looks magically beautiful, even when it depicts martyrdom. Raising the whole scene composationally, the painter thereby expressed the greatness of the feat made by Florian, and the world around him emphasizes the spiritual beauty of the saint.