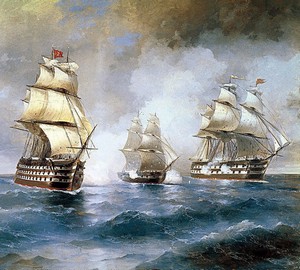 Brig “Mercury” – Ivan Konstantinovich Aivazovsky. Oil on canvas. 221 x 339 cm
The picture was written much later than the events described by it. She was dedicated to the battle during the Russian-Turkish war, when the small and slow-moving brig Mercury distinguished itself by its heroic behavior.

From a distance, the canvas can be mistaken for a peaceful sea landscape with three beautiful wooden ships, literally flying on all sails along a not too calm, but not stormy sea. In fact, not everything is so safe and calm.

The scene is impressive in its monumentality: two huge Turkish linear ships literally clamped in a vice seeming against them with a very small and defenseless brig. It would seem that the situation is stalemate and Mercury is doomed. But the crew decided to give the fight and left it as a winner – both the Turkish flagship and the second large ship lost their masts, could not maneuver and were forced to shamefully leave the battlefield. So a small sailboat behind its squadron demonstrated the heroic nature of Russian sailors – they die, but do not give up.

The most climax of the naval drama is reflected on the canvas. “Mercury” from both sides is attacked by enemy ships, and he retrieves cannon strikes in response. In the distance you can see the ghostly silhouettes of the squadron. The alarmingness of the event is emphasized by heavy dark thunderclouds and a turbulent sea, as if worried about the event.

Needless to say, how magnificent and subtle is the master of the sea and the sky. The whole picture is simply breathtaking with sea freshness, despite the general tragedy of the situation. In the end, the sea is eternal, in its lifetime it has seen various battles and is completely indifferent to small and large human tragedies. And on Mercury, which by all standards should be sunk by enemy ships, only four Russian sailors died.