“The Morning of a Young Man,” Peter de Hoch, is a description of the picture 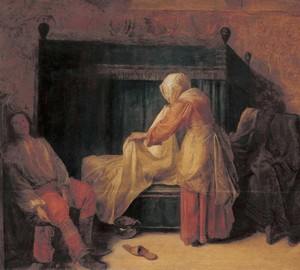 This picture was written by Peter de Hoch during his formation. In it, the interior plays the role of a background, the main place in space is occupied by people, there is no large number of carefully written parts, characteristic of later works of the artist. With his soft humor, the painter shows us the morning of a young man.

When looking at the picture, it seems that the master was in the room at that moment, so everything that happens seems real.

Before us is a clean and tidy room. A golden brown wall covered with ornaments is a wooden bed. Heavy dark green silk curtains and a lambreken adorn it. A dark blanket is hung from a chair.

Nearby, leaning against the wall and hiding in the shade, a young man sits. It can be seen that he had a good drink and had fun at night, but now he really wants to sleep. The bed is nearby, but there is no strength to get to it. In the shade, we can consider the slightly rumpled face of the goulaki, the eyes look at one point. It’s hard for him to focus on anything. Hands are limp, he is no longer able to take off his second boot.

The maid spreads the bed to lay down the falling asleep host. Everything has long been prepared for her: slippers are waiting, the night pot is polished to shine.

The morning sun illuminates most of the room. Warm golden brown shades played walls, folds of the silk curtain overflow with greenery, and a golden fringe will sparkle. The red color of a woman’s dress becomes brighter and richer.

But the look attracts a snow-white sheet, which in brightness competes with a dazzling-white starched bonnet and a maid’s apron. This is the brightest spot in the picture, linking everything into a single composition.

A simple plot, but the artist gives us the opportunity to see real people living at that time.

This picture has its own unusual story. The prince of Trubetskoy was sure that she depicted young Peter I in Holland and gave it to Emperor Alexander III. But later it turned out that the picture was created long before the birth of Tsar Peter Alekseevich.