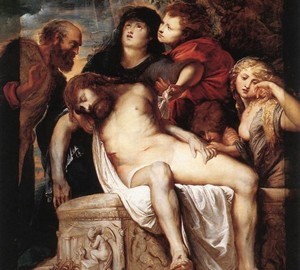 Rubens (1577-1640), whose name is inextricably linked to the Baroque style, painted this picture during his first visit to Rome. He combined here the iconography of the play – the crying of Our Lady over the Son – and the position in the coffin.

Mary supports the deceased Christ, His body looks heavy, his head is clinging to his shoulder. Around are the saints Joseph of Arimathea, John the Evangelist and Mary Magdalene. The body of the Savior is almost naturalistically depicted, the rest of the heroes are immersed in deep experiences. The tense atmosphere of the canvas is also created by the close production of figures, as has often been the case in baroque art. The theme of the crucifixion of Christ is echoed by reliefs on a sarcophagus with scenes of sacrifice.

The color of work with its finest written human flesh, bright color spots, thunderstorms and a lighted foreground gives rise to a feeling of anxiety and at the same time sublime. In combination with realism with the solemn mood of the depicted, the influence on Rubens of Roman artists of that time and primarily Caravaggio affected.