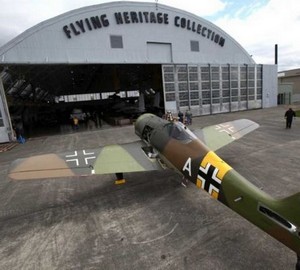 The Museum “Collection of flying heritage”, located in Everett, Washington, is popular presents combat aircraft that survived the 2nd world war. It showcases exhibits that were created by the leading technology of 30-40 years in the midst of the development of aviation skills in USA, UK, Germany, Japan and Russia. Are those planes which have faced in air combat and was taken from the field of battle. Most of them have been restored with high precision, although there are some that have been restored by their owners.

The main inspirer on display the original aircraft was the Floor.G.Allen. Since 1998, he has become “iconic warriors”, always serious about their recovery and ultimately decided on their public demonstration.

At the moment the Museum’s collection may surprise about 15 rare air machines and other items of historical value. Among them are:

– German plane FW-190А-5 role fighter-bomber. In the fall of 1941 entered service. On the Eastern front near Leningrad on 9 July 1943 during the attack crashed. Upon discovery in 1980 was surprised by its pristine condition.

– German plane FW-190D-13, modified for fighter operations and intercept. The only “long-nosed” exhibit, which survived the war. Now it is restored and it can even fly, but because of its rarity, cherish it.

German fighter BF-109E-3, built in 1939. The legendary car was piloted by Eduard Hemmerling mostly over France. The exhibit was discovered in 1998 near Calais, sticking out of the sand.

– Soviet plane Po-2, which acts as a training. During the war it flew the bombers were restored by the Polish aeroclub, although it was originally located in Belarus.

British hurricane aircraft Мк2А made in Canada, but not taking part in hostilities.

The process of restoring the aircraft in the Museum is paid to the importance of trying to preserve the original appearance. A lot of time is spent on exhaustive research, searching for suitable parts and materials. Among the exhibits there are those who, for example, to this day, the original radio are in good condition. The attractiveness of the aircraft is not limited to appearances and their condition, equally impressive history, which is in each sample.

The Museum “Collection of flying heritage” depending on the period of work seven or six days a week from 10 to 17 hours. On Thanksgiving and Christmas days the Museum is closed. Every summer the planes from the flying heritage collection operate flights from 12 to 13 hours, demonstrating the lovers of aviation its serviceability. History buffs can brush up on your knowledge, listening to lectures Measles Graph, is a historian of military aviation.