The Museum of Royal Carriages in Bulak, Egypt 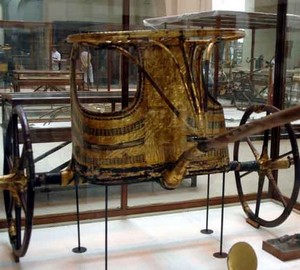 In the heart of Cairo Bay, in the territory of the Military Museum is a separate, self-exhibition, consisting of Royal ceremonial carriages, coaches and cars.

Before the revolution of 1952, Egypt was a Kingdom. Therefore every official departure of the ruling family was accompanied by the lush ceremonies.

To find the Museum is not easy, because, despite the fact that it is located on the territory of the military Museum, the building it is a little bit away and lead him pointers entirely in Arabic. It makes sense to ask directions from passers-by.

Inside, visitors will find a string of carriages, coaches, coaches who were once participants of important state events and celebrations. Near each exhibit comprehensive information (including in English). About a third of the crews were presented to the Royal family of European monarchs and heads of governments. There are those that were purchased by the Egyptian government, personally by members of the Royal family.

Among the particularly valuable exhibits, a gift of Napoleon III, made on the eve of the opening of the Suez canal.

Together with coaches and Lando in the Museum presents the cars for the Royal visits, parades and solemn meetings.

Except of carts and carriages in the Museum is a huge collection of accessories: whips, saddles, carriage lamps.

Much attention of visitors attracted by the collection of Kucharski liveries, bright and richly decorated. There is also the official Royal outfits.

A special place in the Museum is exhibition of gifts to the Royal family, from heads of state.

Unfortunately, with the beginning of the next Egyptian revolution, the reconstruction of the Museum stopped. Currently the exposition is closed.