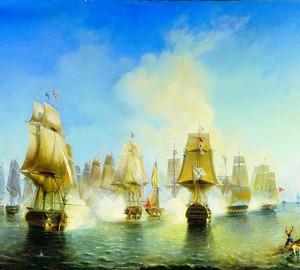 1807 year. The Russian-Turkish war is in full swing, battles are going not only on land, but also on the sea. And so, not far from the Athos Peninsula in the Aegean Sea, despite the numerical superiority of the Turks in ships and artillery, the Russian squadron attacked the Turkish fleet of the Cappudan Pasha Seida-Ali on July 1. Our sailboats were commanded by Vice Admiral D. N. Senyavin. This moment was captured by the artist on his canvas.

And the battle is in full swing at sea. The morning silence is broken by the roar of guns, tearing teams, the crack of broken masts and gears. On the left, a column of the Russian squadron opened mass fire on the enemy, lined up in a straight line. In the foreground, the linear ships in front broke through the construction of the Turks and, approaching them, concentrated firing on the flagships of the Turkish fleet.

Yellow-white smoke clubs from continuous shots envelop the hulls of sailboats, rising to the sky. Damaged ships with broken rivers and torn sails lost their course, interfering with the movement of other ships. To the right, in the lower corner of the picture, Turkish sailors are trying to escape in a semi-flooded boat. One of them, with a bare torso and in bright blue harem pants, threw his hands, asking for help. Another sailor is nearby.

Light, gentle blue and azure tones of the sky, overflows of golden and emerald sapphire shades of the sea, melting in the distance white-pink smoke, cream-beige colors of the sails give the image romanticity, fill it with light and air, give a sense of the smell of the sea and coolness of the light wind.

An alarming note and drama in the image are added by red spots of flags, dark marshy color of ship reflections in water, tense silhouettes of commanders on the deck, figures of fleeing people. The picture makes us empathize with what is happening, peering into it and finding new details.