The painting “After the Thunderstorm”, Fedor Aleksandrovich Vasiliev – overview 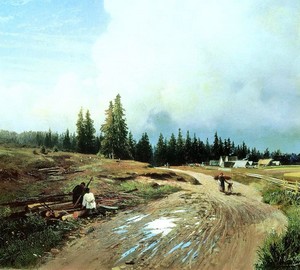 After the thunderstorm – Fedor Aleksandrovich Vasiliev. Oil on canvas. 53 x 45 cm
The painting of Fedor Vasiliev “After the Thunderstorm” is an example of a village landscape – a genre that the artist became interested in in his youth and developed in his work. The inspiration for the painter was Konstantinovka, a village near St. Petersburg, where he went with his colleague and friend Ivan Shishkin. Outside the city, Vasiliev spent the whole summer, so there were enough impressions for a number of paintings depicting peasant life.

The canvas is vertically located. Most of it is occupied by a bright blue sky with white fluffy clouds. Below is a distance-flying country road dotted with puddles from the recent rain; on the right side of the trail you can see a low fence and village houses, and on the left there is a small slope under which peasants with tools are busy working with logs. In the background is a dark spruce forest.

On the way, heading towards the viewer, there are a peasant woman in a skirt and red scarf and a child. A woman carries a bundle of firewood behind her, and the boy runs nearby, holding her hand. Subsequently, Vasiliev will once again introduce female and children’s images into his landscapes, making them central and investing in them the main artistic meaning – the harmonious connection of man and nature.

The palette of the work is straightforward: these are various shades of brown and green colors, as well as bright blue tone of the sky. Such simplicity of performance gives the picture lightness and freshness.

It should be noted that the picture was written in the early period of Vasilyev’s work. If we compare this canvas with other, later ones, some inexperience of the creator is noticeable: the subtleties of lighting, in which the artist usually put his entire poetic plan, are not so elegant here. Nevertheless, for all the accuracy of the work, it causes the audience a lyrical mood, conveys the entire breadth of the creator’s soul.