The painting “Baba Yaga in a Stupe” Bilibina – overview 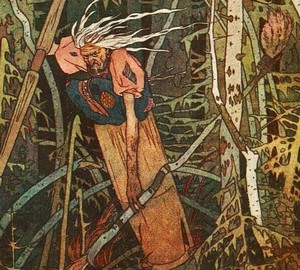 “Baba Yaga in Stupa” – Ivan Yakovlevich Bilibin (illustration)
The illustration of “Baba Yaga in Stupe” was written by Bilibin in 1900 to the fairy tale “Vasilisa the Beautiful”. According to the plot, Vasilis comes to Baba Yaga for fire. After completing all the tasks of the forest witch, she receives a skull with burning eyes. This “gift” helps a girl free herself from the yoke of a stepmother and sisters.

The artist devoted a lot of time to the study of antiquity and folk beliefs. The folklore image of a demonic old woman is often found in the mythology of the Slavic peoples. It was believed that she stood on the border of the world of the living and the kingdom of the dead.

In illustration, the old woman proudly sits in a mortar as a full-fledged mistress of the forest. The riders of a clear day, a red sun and a dark night are her faithful servants.

Baba Yaga is depicted as a terrible witch with a hooked nose, piercing eyes, long fingers with claws. The old woman merges with the landscape, acquiring his shape. A fallen dry, fly agaric will echo her appearance. It moves dynamically, tree trunks bend, unselected tangled hair develops back. At the first glance at the drawing, the wind is howled from the impending threat. The image of Baba Yaga is not at all comic, it causes genuine fear. The artist seems to make it clear that with unclean power, jokes are bad.

According to the plot of the tale, the ominous Baba Yaga helps Vasilisa. But how can this be? The ancestors of the Slavs believed in spirits, not dividing them into bad and good. The joint existence of dark and bright forces is necessary for the balance of energy. The author caught this in the identity of Russian villages, in which everyone believed in lefties, water, housework, sincerely respected them, tried to agree with them. Ancient rites and customs were passed from mouth to mouth. So Vasilisa managed to appease the forest woman and get what she wanted.

The pattern frames the geometric ornament. Bilibin often decorates work with patterns in his own style. Here, the artist depicts obvious Slavic symbols as on village cash or embroidery. Guard symbols protect a person from the effects of evil spells. Like the Vasilisa mascot doll, the ornament seems to be designed to restrain the powerful unclean power of Baba Yaga.

The fabulous illustrations of Bilibin immerse the audience deep into the ancient world, full of legends and secret knowledge.