The painting “Before the Thunderstorm” by Fedor Vasiliev 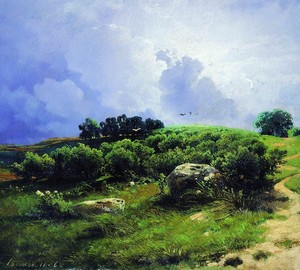 Before the thunderstorm – Fedor Aleksandrovich Vasiliev. Oil on canvas. 29 x 36 cm
This is one of the early works of Fedor Vasiliev. In it, he turns to one of his favorite stories – the moment of the change of weather, approaching inclement.

The artist was greatly impressed by his trip to Balaam in 1867. It was then that he began creating the landscape “Before the Thunderstorm”, in which the typical nature of the island is guessed: a rocky area with a variety of vegetation. At the same time, Vasiliev is mastering new drawing techniques, begins to write more lively and emotional canvases.

The sky best conveys the meaning of the picture, which the painter especially liked to depict: on the right side it is light blue, sunlight is clearly visible through the clouds. But on the left side thunderclouds are already approaching, the sky is getting dark.

Below there was a green field with low trees, bushes and a pair of boulders in the foreground. On the right you can see a winding path that goes somewhere in the distance. In the background is a grove, a lonely tree after the road and birds.

The tension inherent in the sky is reflected on the earth: a small forest, to which the clouds are already approaching, looks completely black, and the shadow from it has spread to the whole slope; bushes, flowers and grass in the foreground are already slightly clinging to the ground from the wind. Against the background of the dark strip of trees, a lonely white bird stands out, catching up with its brothers. The rest of the field, still flooded with the sun, is written using bright and saturated green shades.

The landscape depicted on the canvas is a typical example of Vasilyev’s work. At the age of 18, he begins to use the play of light to convey contrasts in the tense and disturbing atmosphere of the picture, the struggle of the sun and thunderstorms. Thanks to this technique, the mood of his work is very special: romantic excitement and spirituality are combined with the expectation of danger, a sense of anxiety and an impending threat.