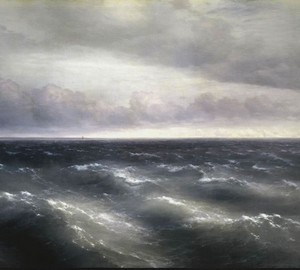 The Black Sea – Ivan Konstantinovich Aivazovsky. Oil on canvas. 149 x 208 cm
Not every artist has been given the skill of reproducing natural elements – air, fire, water. Ivan Konstantinovich was endowed with the ability to portray the sea without measure – perhaps none of his contemporaries could cope with large-scale paintings on the marine theme.

At first glance, the canvas impresses with a spectacular image of the riot of the elements. Looking at him, the reason why the Black Sea got its name immediately becomes clear. Peaceful and affectionate, blue-green and calm in good weather, in a storm this sea turns into a roaring wild beast.

Many ships have found their end in his abyss over the long era of the existence of shipping in this area of the world. A hint of this is the tiny, hardly visible image of the ship on the horizon behind the rough ramparts of water. We do not understand whether the ship is in distress, or whether it is coping with a fierce element, since it is very far from us, almost on the border of the sky and the earth. But, knowing the harsh and unpredictable nature of the Black Sea, sailors who hit the storm on it can only be felt.

The famous picture shows the moment when the storm is just beginning. Before the rising shafts reached their critical height, it is still far away, but the water has already been poured with a deep lead hue, and the crests of the waves show the storm. Even a person who simply looks at the canvas begins to literally physically feel this pitching, because the pattern of waves is conveyed with skill bordering on magic.

The color scheme of the picture is dark, muffled, quite saturated and rich, but not having a single bright or “open” shade. The whole composition is built on halftones, which should make the waves pour live flowers into the storm. The sky is written under the steel waves. It is completely tightened with heavy, like lead in dots, threatening a protracted rainfall and a dangerous thunderstorm. To be in such weather in the middle of the open sea is deadly. And only in the distance, at the horizon itself, the artist painted a bright strip over which white safe clouds swirl. Perhaps it is there, beyond the horizon closed by the clouds, that there is a longed for saving land, where a small boat, lost in the terrible, formidable waters of the Black Sea, strives with all its might.

The general impression of the canvas is the incredible, crushing power of the elements, which has so far been hidden, not played out in full force. But soon, a storm will soon strike…