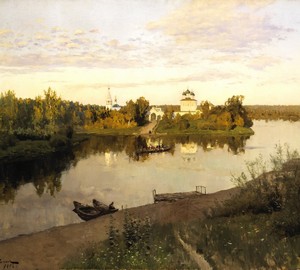 The master repeatedly turns in his work to the amazing harmony of Russian nature and Orthodox values. So in this work, the viewer has the opportunity to see in the picture everything that so often eludes the view in life.

The idea of writing a monastery in the rays of the setting sun has ripened at the author for quite some time. He carefully chose the nature, looked closely, made endless drafts, until, finally, he saw a small monastery on the banks of the Volga. The greens flaming the monastery, the lazy river, bridges, and, most importantly, lighting in the morning and evening hours, made the artist such a strong impression that the inspiration was immediately enough for two paintings created with different moods, written in different angles and differing thematically.

The picture clearly reads three plans with a symbolic meaning. In the foreground is a shore darkened with evening twilight. A narrow path leads to the shore, a small marina is arranged on the sandy beach. Two empty boats are waiting for passengers, the third, completely loaded has already reached the middle of the river.

The symbolic meaning of the foreground of the picture is undoubtedly associated with the world of the earth, vanity and gloomy. The thin path is the path from which spiritual rebirth begins.

The river itself in the picture, as Styx in ancient Greek mythology, symbolizes the border between the worlds. The boat crossing again sends the viewer to the myths of Greece: Charon is a carrier of souls for a fee of two coins. The river at the master becomes a symbol of obstacles and temptations on the way to God.

The main thing in the work is the long-range plan. Here we see the abode flooded with the rays of the evening sun. The opposite coast begins with a wide road straight from the water to the monastery gate. The towers and domes of the temples are modest and restrained. All the greatness of the spiritual refuge is created by golden evening light and pink glances of clouds in the sky.

The author filled his picture with a call to spiritual rebirth, which leads to life in harmony with nature. The lush greens framing the monastery from all sides, in contrast to the meager vegetation on the “near” shore, emphasizes the harmony and harmony between the temple and nature.

The author brilliantly succeeded in water surface, reflecting the “bright” side of the river. The riot of colors that blossomed the sky in the picture adds fabulous and mysterious notes to the mood of work. The diversity and deep meaning of the work makes it one of the most interesting in the work of the great master.