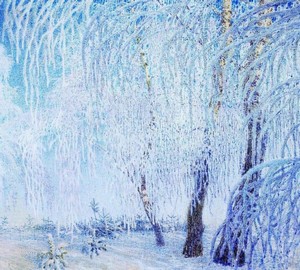 Iney – Igor Emmanuilovich Grabar. Oil on canvas. 122 x 160 cm
Igor Emmanuelovich Grabar painted the painting “Iney” in 1905. In those years, he repeatedly addressed this topic: frost and sun, baked by a classic of Russian literature, sparkling frost on tree branches and crystal snow under his feet.

In his memories, the artist compared the changing color scheme of the yoke with polyphonic music, for the transmission of which he lacks paint. The branches of the birch depicted in the landscape, according to the author, had a special rhythmic structure, and its top made calls and cross-clips of the colors of the rainbow.

The author, who so subtly feels the musicality and poetry of nature, could not help but capture the landscape that struck him. The artist himself believed that with melting snow, the landscape loses part of its attractiveness, was upset by this, sincerely loving winter, and called snow-capped branches diamond lace.

It is known that for hours he painted paintings in the most severe frosts, fascinated by flickering crystals, and for the painting “February Lazure” he even dug a trench in the snow, where he stayed for several hours with a easel.

As in many paintings by Igor Emanuilovich, high birch trees are depicted on the Iney canvas. Their incredibly long branches are hung as if from the sky to tiny Christmas trees, casting purple and blue shadows on snowdrifts. Despite the absolute realism of the landscape, the term “impressionism” applies to it. Moreover, the artist himself was inclined to consider his writing style “machine divisionism” because of the smallest points of smear. He folded the rainbow of fractional smears and received a busy, pulsating air, tangible light, turning into material objects.

The painting is stored in the Yaroslavl Art Museum and is rightfully considered a classic of the Russian winter landscape of the early 20th century.