The painting “Irratic Marriage” by Vasily Pukirev – overview of the painting 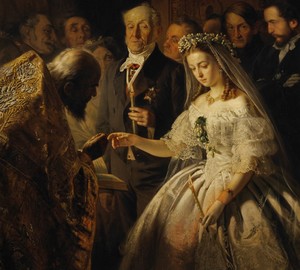 The canvas depicts the interior of the church, shrouded in a twilight. Here passes the wedding ceremony. Closer to the audience is the bride. She is very young: there is still a child swelling on her face, the whole image is written using soft lines and roundings. She is wearing a snow-white wedding dress and veil that emphasizes her soul purity. Her eyes and inclined head show that she cried for more than one night in anticipation of this event. In the left hand, the girl holds a candle, and extends the right to the priest for the wedding ring.

The exact opposite of the bride is the groom. This is an elderly man in a black suit and with an order. Compared to a girl, he stands very straight, even too much – this shows his primacy, squeamishness. The yellow wrinkled face does not look alive: the fire in the eyes of the old man has long gone away.

Another figure in the foreground is a priest in a golden rice. He is hunched over; holding out a ring to the bride, looks at her from underneath. Or respectfully bowing to her? The figure can be understood in two ways: perhaps he sympathizes with the girl, or maybe he participates in this crime against her freedom and a happy future.

Two female faces are visible behind the groom – also in veil and wedding dresses. But how can this be, because there should be only one bride at the wedding…? Although, if you look better, the dress of the old women is more like a funeral shroud – these are the ghosts of the dead ex-wives of the groom! Obviously, this old girl, who is still a girl, will be brought to the grave.

On the other side of the picture, next to the bride, a best man is depicted. He frowned, crossed his arms over his chest and looked away from what was happening. This is a failed groom who, because of his financial and social situation, was unable to get a wedding with his beloved.

Another character in this “group of the bride” is another young man who looks directly at the viewer and with his gaze conveys deep sympathy for both the bride and the best man.

Art critics, studying the history of creating a picture, developed two versions of what the artist was inspired by.

According to the first version, a friend of Pukireva, a young merchant Sergey Varentsov, wanted to marry Sofya Rybnikova. However, the girl’s parents preferred Sergey to a more successful and wealthy man – the merchant of the first guild Andrei Karzinkin, which was 13 years older than Sofya. Due to other family ties, Sergey himself was forced to attend the wedding as a best man.

Having learned this story, Pukirev created a picture where he also portrayed his friend. This entailed a conflict: Varentsov was indignant, as he was about to marry another girl, so the painter portrayed himself.

This version is quite believable, since the best man has no beard on the sketch of the picture, and he himself looks more like Varents than Pukireva.

The second version says that the picture is autobiographical, and the canvas depicts Pukirev himself and his failed bride Varentsov Praskovya Matveevna. In 2002, a drawing of another artist was discovered, V. D. Sukhova, where a woman of age is depicted. In the signature to the work, it was mentioned that the widowed Praskovya lives in a almshouse.

The prototype of a person looking at the viewer was definitely a friend of Pukireva, painter Peter Shmelkov. But the image of the groom is rather collective: some art historians believe that the figure, head and hairstyle are taken from different familiar artists.

“Unequal marriage” is a grand canvas that significantly affected society: after its exhibition, many elderly officials refused to marry very young girls. Unfortunately, this masterpiece became the only work of Pukirev, appreciated.