The painting “Ivan the Terrible and his son Ivan on November 16, 1581,” Ilya Repin 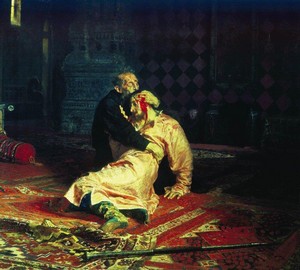 You can hardly find the picture of Repin more famous than this. The impression she makes on the viewer is simply stunning. The situation itself is monstrous. King Ivan the Terrible killed his son Ivan, thereby interrupting the Rurikovich dynasty, which ruled Russia from the 9th century.

The moment of insight and awareness of the deed appears before the audience in all tragedy. The king is in a panic, before us is not an autocratic ruler, but an old man distraught with grief and horror. Having clung tightly to the dead body of his son, he tries to close the wound on his temple, from which scarlet blood still runs. He is desperately trying to correct the irreparable.

They are opposed to each other – the figures of a dead son and a living king. The compositionally structured picture so that at first attention is riveted by a dead body, a second ago full of strength, energy, life. Then the viewer sees the crazy eyes of the killer father. The bony hands, the cadaveric yellowness of the face of the formidable king speak of a dead spiritual essence. They seemed to swap places: the dead Ivan-son and while the living Ivan-father.

The atmosphere of sticky horror is entrusted to the atmosphere of royal chambers: red carpets, a tattered armchair, a murder weapon (royal staff), red walls. It seems that blood is everywhere. The shadow of the witness of the crime in the doorway is hardly noticeable. For a moment, people will appear in the chambers to hide all traces of the murder.

An interesting detail is the frame on the wall. The artist provides the viewer to independently consider the purpose of this frame. At dusk, it is impossible to see her. Picture? Mirror? Icon? Rather, a mirror that does not reflect what is happening. Since undead is not reflected in the mirror, the Slavs have believed in this since time immemorial.