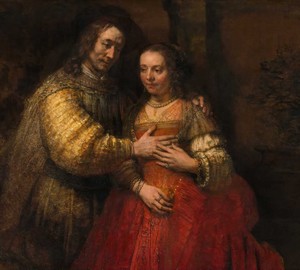 The last picture, “Jewish Bride,” is recognized by researchers as the most mysterious canvas in all the work of the brilliant Rembrandt Van Rhine.

As the painter has, the picture gained worldwide fame for the name that Rembrandt himself did not give her. Like the “Night Watch”, “List in a hundred florins”, so the “Jewish Bride” was thus called later spectators and researchers. In 1825, the famous collector from Amsterdam, Van der Hop, gave both the name and the erroneous interpretation of the plot. In particular, he assumed that the canvas depicts a bride and her father who gives his daughter a beautiful elegant necklace in honor of the wedding.

But the viewer will immediately notice inconsistencies in such an interpretation. If a Jewish girl is going to the crown, then why does her dress emphasize a voluminous stomach that leaves no doubt – the bride is pregnant? And why so gently, not at all in a fatherly way, a man leaned against her, putting his hand directly on the elevator of the dress?

Today, scientists definitely converge in one thing – this is a couple, husband and wife. But who were they in reality? Opinions are divided into this. According to one version, Rembrandt depicted his son Titus and his wife Magdalena on the canvas. This explanation is quite rational, since the creation of the “Jewish Bride” was preceded by the writing of two separate portraits, a son and a daughter-in-law, and the subsequent creation of their pair portrait then looks very logical.

According to another version, shortly before the death of the master, a young couple from the Jewish community came to him (reliable evidence was preserved), some Abigal de Pina and Miguel de Barrios with an order for a pair portrait. They, they say, and paint in the picture “Jewish Bride.”.

The third version suggests that the plot of the canvas is based on collective images from famous biblical couples – Judas and Famari, Isaac and Rebecca.

Whoever was depicted in the picture, Rembrandt’s innovation was not in choosing a plot, but in its embodiment. Immediately striking as heroes are unusually dressed, they are like artists on the theater stage – a beautiful men’s costume, a delightful magnificent dress. A luxurious combination of red and gold. This is a very characteristic technique for a painter, it is enough to recall how he dressed up his Saskia (Flora) or mother (Saint Anna) for portraits.

Heroes come out of the dark, although this is the city landscape, and the most striking, climax elements are three hands against the background of the bride’s dress – a hand with cloves in the abdomen, a man’s hand on his chest and a heroine’s hand over the male. Elegant hand weaving, “breathing” with light, gentle touch.

Thanks to the extraordinary combination of black, red and gold, the picture turned out to be very original and bright. The master first created space in color, and only afterwards gave it volume, writing the figures of people.

At the end of his life, fed up with religious and mythological heroes, as well as staged group portraits, Rembrandt creates a canvas where the heroes do not do any action – they just live. So the “Jewish Bride”, lyrical and romantic, tender and mysterious, shows only the relationship of the married couple, full of feelings and worries.