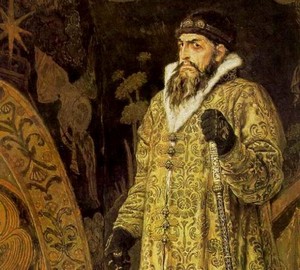 King, for the convinced monarchist Vasnetsov, the sacred figure, the anointed of God, the benefactor. Therefore, it makes no sense to judge the conformity of the portrait to historical realities. But what a fantasy!

Ivan Vasilievich walks up the stairs of his chambers. His gaze is heavy, severe, formidable. But there is no rage, painful cruelty in him. Vasnetsov gives us the image of a wise king, statesman. The golden color of the monarch fur coat further emphasizes its exclusivity, greatness, proximity to the world of the highlands.

Strongly, the sovereign squeezes his rod in his hands. This is not a staff, not a support. In the hands of Ivan the Terrible is his weapon. This rod pierced the leg of the servant of Prince Kurbsky, the sworn king of the enemy. Walked this rod and on the backs of the Barsky. At best, only a rod… In the other hand of Ivan Vasilievich – rosary, a symbol of the deep faith and piety of the Orthodox king.

The red carpet under the feet of the autocrat, bloody the path of the rulers in Russia. Another second and the leg of the formidable king will come to the image of the coat of arms of the power – the Byzantine biceps eagle. Symbolically. Ivan Vasilievich really managed to crush the country for himself, redraw its device, control system. Make it modern, manageable. A terrible price…